Every artist has a story to tell. Those in the entertainment industry must have a website that can clearly convey that story and the message of their brand. Hatfield Media had the pleasure of teaming up with Louisville-based hip-hop artist B Simm to design and develop his new official website.  Our goal was to put his personality and music front and center.

RAISED IN THE VILLE

A triple-threat singer/songwriter, actor and entrepreneur, Brandon Simmons, better known as B Simm, found national success with his first mixtape, “SIMM CITY.” He found widespread recognition with the release of his music video, “You Don’t Want These Cards,” a song that quickly became the University of Louisville’s student anthem and an essential track of every game-day tailgate playlist.

Simmons’ musical journey has landed him on tour with artists such as Lil Wayne, Young Jeezy, Lloyd, Bow Wow, Kalena Harper (formerly of Diddy Dirty Money). Simmons has also opened up for Tekashi 69, Ti, Flo-rida , Nelly and more. He got his acting debut in the 2018 film “River Runs Red” alongside Taye Diggs, George Lopez, and John Cusack. In early spring of this year, Simmons released his latest studio album, “7 (SEVEN),” available to listen on SoundCloud.

When Simmons began working with Hatfield Media to develop his website, our creative team focused on designing a responsive, user-friendly site with an edgy aesthetic fit for the B Simm brand.

The website tells B Simm’s story in a simple yet powerful way by utilizing photography as the site’s visual focal point. The overall site design keeps its integrity no matter the screen size. The Hatfield Media team also custom-developed the menu and page headers. The site’s layout was designed to make updating portfolio pieces as easy as possible.

The site also features an online store for all BSimm merchandise, which includes the newly released “You Don’t Want These Cards” apparel collection. The new designs are CLC Certified/NCAA Official Licensed Apparel through the University of Louisville. The collection is available for purchase online and in local fan shops such as Mine & Yours at the St. Matthews Mall. 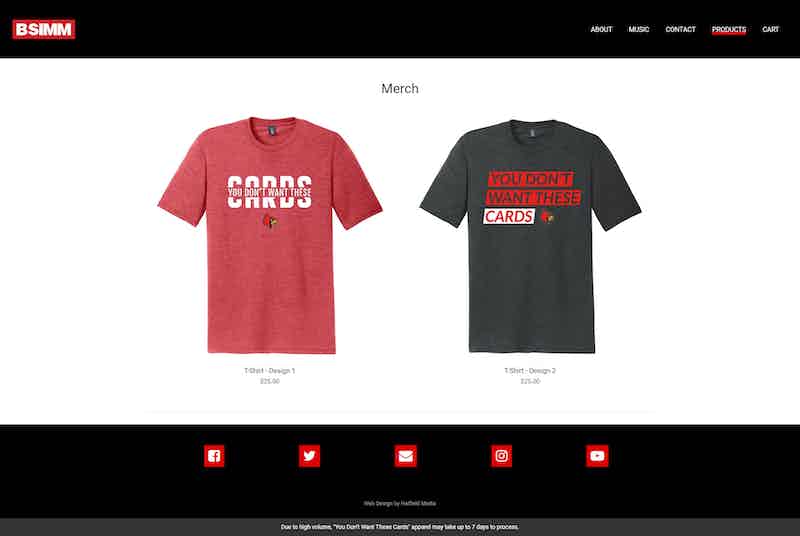 Our team had a blast working with Simmons to elevate his online presence. We can’t wait to see what the future holds for his career, and we look forward to building on this partnership in the days to come.

"Hatfield Media is more than just a company. It’s a vibe,” said Simmons. “Every time I walk in the building Hatfield has added another member to the team. All love.”