For decades, Connected Nation has pursued its mission to expand access, adoption, and use of broadband (high-speed internet) and its related technologies for communities across the U.S. On November 17, 2021, Connected Nation recognized 20 years of incredible service with a singular anniversary event: “A National Conversation on the Digital Divide.” The non-profit organization trusted Hatfield Media with its inspired vision, where our web development and video production teams collaborated to create a compelling live stream experience with a sleek, new site to match. Together, we helped bring about this never-been-done-before event with ingenuity and gusto.

A Universal Need for Digital Speed

Just over 20 years ago, a Western Kentucky University professor in Bowling Green, Kentucky witnessed a need for The Center for Information Technology Enterprise (CITE) — designed to help organizations leverage the world of information technology to better keep pace with the changing global economy. 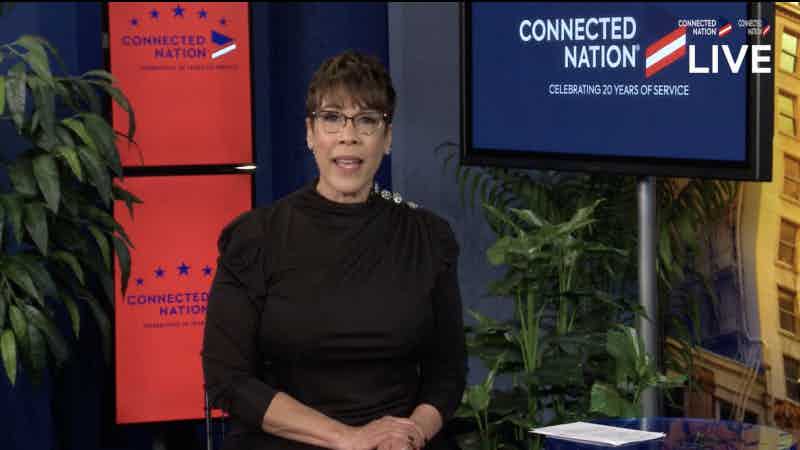 What began with a professor perceptive to a radically transforming digital world has culminated in a groundbreaking, national endeavor — born out of Kentucky’s call for economic advancement. Now, Connected Nation seeks to empower lawmakers, federal leaders, and local community advocates to make a difference: understanding that a more digitally inclusive world will be equipped to serve digital equity.

“All people, whether they live in rural or urban areas, want to have access to the opportunities technology provides,” asserts Jessica Denson, Director of Communications at Connected Nation. “Because of the pandemic, there’s been more of an understanding of why broadband access matters, especially with people working from home. Without adequate access, you’re in trouble.”

Dialing Up the National Dialogue

“Hatfield Media helped Connected Nation with our web development four years ago. They gave us a great look, a good timeline, and did a great job helping us make our online platform stronger,” highlights Denson. “So, when it was time for our 20th anniversary event, it was a one-of-a-kind event, which was not just something anyone could do. Not only that, but it involved broadcasting live from multiple cities, putting together videos and graphics while streaming it all live. 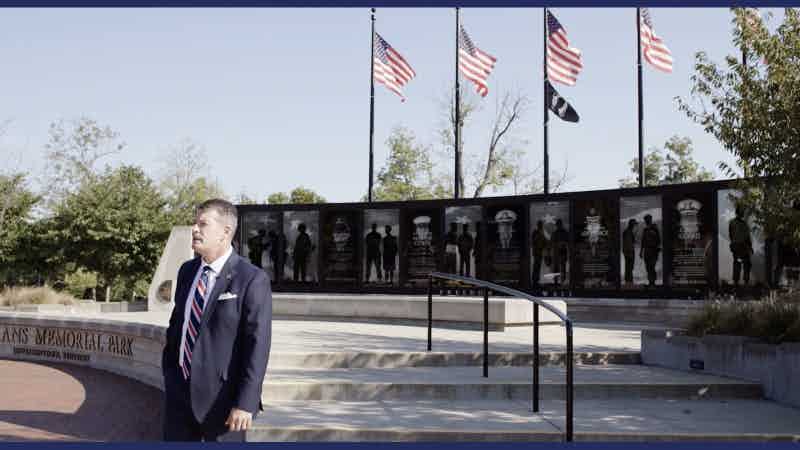 This has never been done from multiple live locations not affiliated with one another. Usually, something of that level would be done using a single television network’s connections, such as NBC or CNN. We not only coordinated our broadcast with two unaffiliated networks (NBC and RFD-TV) but we were also live from a high school location where they teach broadcasting. This truly was something that has never been done before.”

Denson turned to Hatfield Media’s Director of Video Production, Chuck Rogers, to facilitate the live stream she envisioned. “Chuck helped make it happen. I had big dreams and big ideas. We originally went to a couple tv stations and they couldn’t or wouldn’t do it. There was some learning on his side too — learning about different technologies. He put that time in. Together, we were able to make it great. Without Chuck’s commitment to this, it would not have been as great as it was,” notes Denson.

Rogers explains that where Denson “acted as director during the show, calling the cues for the production crews in the four locations,” he “created most of the still graphics, chose all the program music, and created the various lower third and overlay graphics.” Moreover, Rogers adds, “I also acted as the technical director, switching and controlling the various sources and components for the event.” A total of seven live panel discussions took place in Washington D.C., Sugar Land, Texas, and Portland, Oregon, with Rogers at Hatfield Media, navigating the moving pieces at headquarters and control from Louisville, Kentucky.

“Panelists included government and private sector leaders that could speak about the growth of broadband service and the expected needs for continued future growth in systems; as well as the history and future of the Connected Nation Organization. My job was to provide the tech support and gear needed to act as the control center — for a program with live inputs from across the nation, in three different time zones, using a variety of broadcast systems,” illuminates Rogers.

A Network of Collaboration to Customize the Audience Experience

Autumn Pace, Hatfield Media’s BaseCamp Front-End Developer who contributed Lead Web Support Specialist work on this project, believed a one-of-a-kind event was worthy of thinking outside the box. “I felt it was really important for Connected Nation to have a beautifully designed, custom-built live site to elevate their audience’s live streaming experience,” affirms Pace. 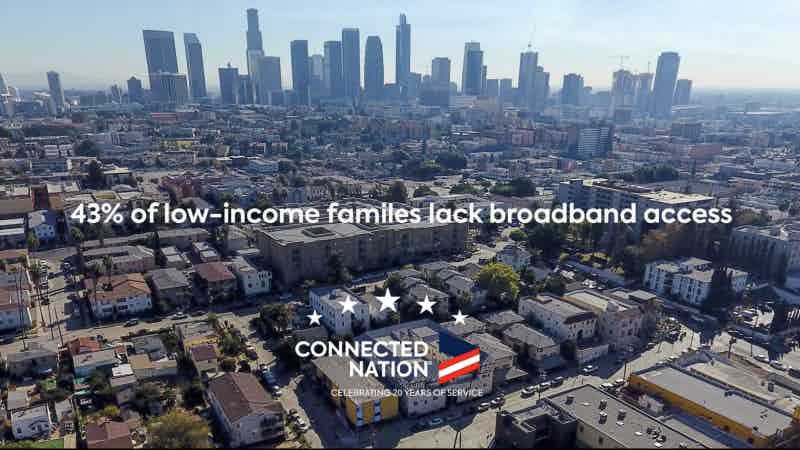 “Connected Nation was looking for a modern site with a professional and updated look. They wanted us to build a complementary digital space that would reflect their brand and feel connected to their main website. We implemented light, intentional touches like the logo navigating to Connected Nation’s production site to help achieve that,” continues Pace, who feels proud to be a part of such a dynamic team.

“Our Senior Graphic Designer, Kaen Blevins, has this incredible ability to design and create intuitive, modern designs,” says Pace, noting, “He played a major role in capturing Connected Nation’s unique vision and brand. I enjoyed working alongside him to discuss how to develop the site in a way that would bring his designs and concepts to life.”

Blevins shares, “I endeavored immediately to craft an enticing design, where the client offered us a lot of room to play. I brainstormed in the space of those open possibilities with accelerated momentum, driven to innovating a fresh look that would speak to Connected Nation's meaningful mission — all in time to celebrate the client's 20 years of service!”

“Kaen did an amazing job knocking it out of the park,” adds Pace, expressing, “I am always both terrified and honored to work on a design by Kaen, because he is not afraid to give us designs that really push us to learn and grow.”

A Navigable Online Platform to Connect the Nation

Alongside design, Hatfield’s development team built out each detail of this site, so that it would work effortlessly in tandem to stream this livestream event. “With front-end development, we have to not only think about functionality and implementing the design we are given, but we also have to consider the scale of the site on any potential device,” highlights Pace, observing, “This means we deal in a lot of ‘what ifs.’” 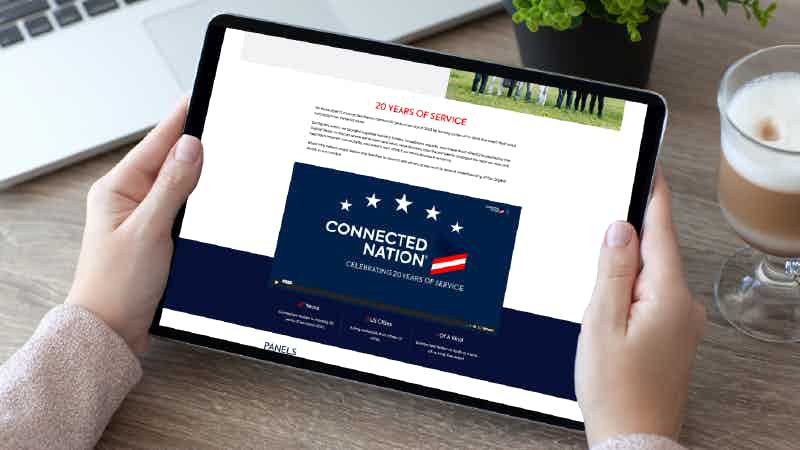 “Taking into account that some of Connected Nation’s online visitors could be viewing the event site on a mobile device, a conference room television, or even a projector shaped our approach to development,” says Pace, adding, “Adam McMahan, an exceptional Front-End Developer at Hatfield, developed one of the most challenging blocks — the panelist block — to successfully and quickly knock out its complex functionality.”

McMahan explains, “We knew we needed to display a large amount of data, tying it together for a seamless and dynamic user experience. I built the functionality for the panelist block with this in mind, presenting Connected Nation’s different panels and panelists in a way that would feel easy for livestream attendees to discover. By only featuring the panelists and descriptions for selected panels, we allow users to get the important information quickly at a glance — all while giving them the opportunity to dive deeper and learn even more, including the bios of the individual panelists.”

Commending him for tackling the intricacy with finesse, Pace applauds McMahan, sharing, “He is always awesome and I love seeing him flourish at work! I seriously cannot sing enough of his praises.” After all, Pace reflects, “When a nuanced project all gels in the end after diligent efforts and steadfast teamwork, it feels amazing to see the final result! This project really helped me explore my own leadership capabilities, where I was able to take the reins and lead this vision to fruition.” 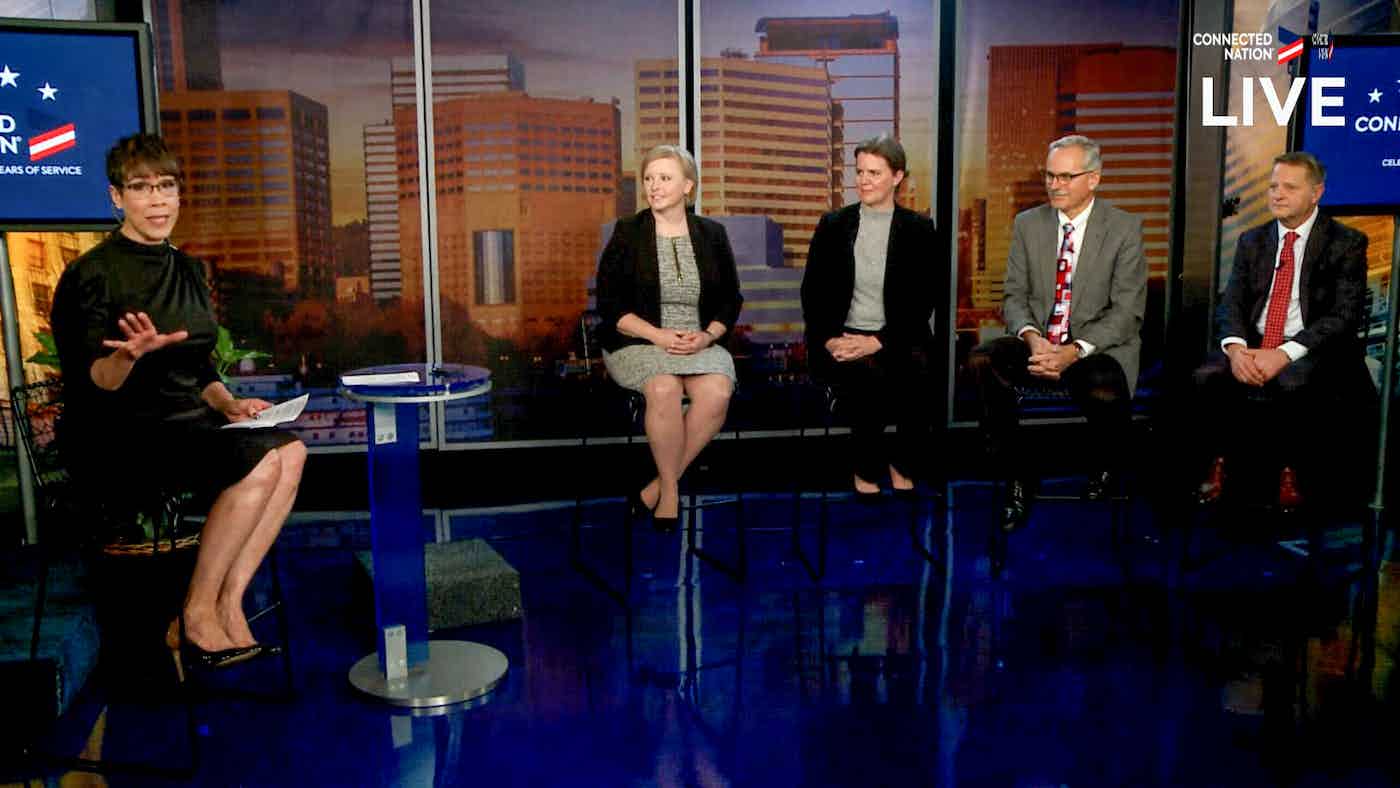 “The 20-year anniversary event we held last year was truly a national event,” says Denson, explaining, “We wanted to do multiple live hits from different cities and different outlets, including a school and a tv station, bringing it all into a Louisville studio. Hatfield had great experience and the staff to handle something unusual. They really saw the vision we had.”

“It’s pretty unusual to have no technical issues. I worked in television prior to joining Connected Nation for about 25 years. Just about every broadcast has at least something small go wrong,” notes Denson, adding, “I feel this 100% captured our vision. We’ve entered it in a Peabody. We’re entering it in the national Emmy’s. I feel it’s that strong. It really captured the stories.”

Visible on-demand on its own tailor-made site, this powerful discussion is “free, it’s online, it can still be shared, and you can see it at any time,” says Denson, continuing, “It’s something accessible — that’s the main thing. We wanted to make sure people understood how this issue impacts others. We spent months producing videos in advance of the broadcast to show what it means in schools, libraries, rural areas, farms, telehealth, and mental health.”

Denson expresses, “We had to be always going for four and a half hours — nonstop. To have those kinds of moving parts and do well is pretty incredible. I was executive producer at two different stations. You just don’t see that happen very often. It doesn’t happen at that scale — you just don’t see it.”

“Working with Chuck was amazing. I asked for multiple run-throughs. He never had an issue with a single one. It was awesome. We did two or three run-throughs before we ever went on a broadcast. We had the final broadcast, graphics, and setting up stories. We were so hyper prepared, and that’s why it went well,” reflects Denson.

“With a billion dollars on the table right now, decisions are being made that will impact who gets access and who doesn’t. We want to help people make better decisions as to how they’ll invest those dollars,” asserts Denson, advocating, “It’s important to share this conversation.”